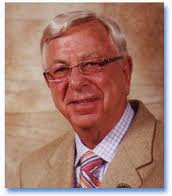 Jimmy Smith was a great butcher for 40 years. He earned a total of $400,000 over that career. After being forced to retire because of an injured back, his wife suggested he become a crosswalk attendant at a local school, that there was nothing out there for an injured 56 year old butcher.

But at age 62, Jimmy found network marketing. He did the math. He was good at math! That changed his life, and the lives of millions of people! Today he and his two daughters have earned almost 30 million dollars, and last year he paid more in taxes than the president of the United States earned! He has over 600,000 people in his downline!

Today, at age 84, Jimmy is still living a great life by helping others do the same! He says, “It seems the more I give the more I get.” “Do unto your downline as you would have your upline do unto you” and “Ask not what your upline can do for you but ask rather what you can do for your downline.” “I’m convinced your success in any endeavor depends on your belief level.”

“I had to prove to my kids that this was viable because my kids didn’t believe in network marketing.”

“If we could get people to understand that all network marketing is, is a whole lot of people doing a little bit, and if everybody came into their company and used the product… and shared the product… they would have true wealth.”